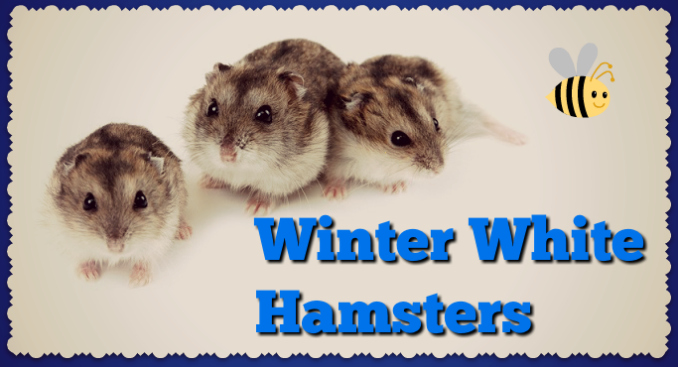 The Winter White Hamster, also known as the Winter White Dwarf Hamster, Djungarian Hamster or the Siberian Hamster, is one of three different species of hamster in the Phodopus genus. Winter Whites are native to parts of northwest China, Kazakhstan and Mongolia. Closely related to the Campbells Dwarf Hamster they can interbreed and create hybrid offspring (Not Recommended). As with all species of hamster, they are common as pets in Europe, Asia, and North America commonly kept as pairs or in a group in captivity. Winter White hamsters have the distinct ability to change the color of their fur to being fully white as winter approaches, hence their name “Winter White.”

Male winter white hamsters have a single scent gland located on their undersides, a bit below their midline. These glands stick out, are sometimes hairless, and often look covered in an oily secretion.

Winter Whites gained their name because, in the wild, the areas in which they live are covered in snow in the winter time, and so they change their coat to white so as to be camouflaged from predators.

Winter White or Hybrid – Which kind of hamster Makes the best Pets? 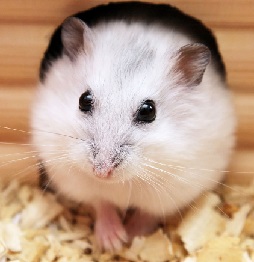 Pet stores often miss-label their pets as Winter Whites, when they are Hybrid hamsters sourced from rodent farms. Private adverts stating ‘winter white hamsters for sale‘ are more than likely to be hybrid animals unless expressly declared ‘pedigree.’ You can only get a Winter White Hamster from an accredited breeder that can provide you with a pedigree certificate and a history of the hamster’s lineage.

Appearance of the Winter White

Much like the Campbell’s hamster, they have the same amount of chromosomes, and they grow to the same size – roughly 2 – 3 inches in length. Compared to other hamsters, winter whites have a rounder oval looking body shape with fur covered feet and legs.

One of the best ways to distinguish the Winter White from the Campbell’s is the fact that winter whites have a more Romanesque profile nose.

Winter Whites are much softer to the touch and have a smoother and less wooly coat compared to the Campbell’s. They come in three main color varieties – sapphire pearl, sapphire, and natural pearl. There are some other coloring’s available, but they are more than likely crossed with Campbell’s thus making them hybrids. Both hamsters have dorsal stripes; the winter white has more definition on the arches giving a greater contrast between colors.

Sometimes you will see Winter Whites advertised as ‘mushroom,’ ‘Mandarin‘ or other colors. They are not pure Winter White (these color variations comes from their Campbell genes).

Winter White hamsters are quite placid animals and can be tamed very easily making excellent pets. When fully tamed they love to sit in a human hand and be stroked gently. They are more timid animals compared to their closely related Campbell’s hamster.

Winter Whites are very social animals and do the best living together with another same-sex hamster or in small even number groups. It is enjoyable to watch their interactions and offer a much different pet experience compared to the solitary Syrian Hamster. Winter Whites are capable of living with Hybrids, Campbell’s and Winter Whites from other litters if they are introduced to each other correctly. Lone hamsters can live healthy lives as long as you give them regular attention and they have a nice big cage filled with things to do.

Male Winter Whites tend to be less prone to fighting and territorial behavior than females. They can be quite noisy when living together, often squeaking at each other. Usually, this is just communication – establishing who the boss is and submissive, or sometimes it is just their way of saying “stop standing on me” or “I want that piece of food!”. Winter White hamsters are known to be “big babies.” I have often thought one of them was being brutally murdered only to find out that one of them has fallen out with a toilet roll tube. 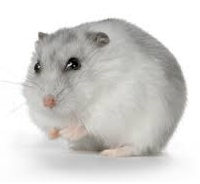 You can maintain good relations between Winter Whites by providing them with a large cage with plenty of room and making sure they have many wheels, toys and food bowls to prevent them fighting over the use of them. Dwarf Hamsters do best when given plenty of open plan space, multi-story cages and module habitats with tubes are not ideal for them.

If squeaks all of a sudden become louder, more pronounced and longer sounding check up on them as one of them might be getting bullied. Severe fighting (to the death) is usually a quiet affair but not always the case. Having your winter white hamsters fighting is never a good thing for owners or pets.

Life Span – How long do Winter White Hamsters Live For?

In the wild, Winter Whites typically have a lifespan of around 12 months however when kept in captivity and provided with excellent care and nutrition they can live for two years plus. Some owners have reported their hamsters have lived up to 4 years. If you want your pet hamsters to live as long as possible, provide them with proper nutritious diet, plenty of exercise and lots of mental stimulation (toys).

Care – How to take care of Winter White Hamsters

Winter White Hamsters should be provided with a large environment to live with adequate food, bedding, toys and a hamster wheel to provide exercise. If you keep two or more hamsters, make sure they have multiple hamster wheels and toys to help prevent territorial fighting.

Experts state that Pure Winter White hamsters unlike Campbell’s and hybrids are not prone to diabetes; however, I prefer to be on the side of caution by feeding them a low/no sugar diet. A small piece of fruit occasionally as a treat is fine. 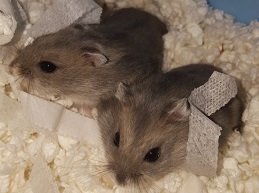 Winter Whites are very similar to Campbells Dwarfs when it comes to breeding. Females can become sexually mature as young as 3 to 4 weeks, and males are capable of impregnating as young as 4 to 5 weeks. Pet stores are often miss informed about their animal stock making many surprise litters for new owners.

Winter Whites have smaller litters when they are in their winter coats, but they still do have the urges to breed.

As with all species of hamster, females winter whites come into heat every four days (roughly). Once the male hamster sniffs the unique ‘heat’ scent from the female, he will attempt to mate with her multiple times. Typical practice is to mount the female, try to mate.. then they will both clean their genitals and try again. This can continue for hours!

Gestation – How long is the Winter White Hamster Pregnant?

Once the Winter White hamster is pregnant, gestation is typically around 18 – 25 days, however, these hamsters have the ability to extend their pregnancy if they feel uncomfortable or threatened.

The male must be removed from the cage a few days before you suspect the female of giving birth as females can become pregnant on the same day as giving birth. This is not a healthy practice and will cause stress on her body as well as quickly making you as the owner overrun with baby hamsters. You should also clean out the cage a few days before birth as you will not be able to for a few weeks while she is nursing.

Litter Size – How many Babies do Winter White Hamsters Have?

You can expect the pregnant female to have anything from 1 to 9 pups per litter; however, 4-6 is the average.